Features: Simple and attractive appearance,adopts high-brightness LED chip and the light is brighter and more stable. The light-emitting angle of the lamp tube can be adjusted, and the light is scientifically arranged; the high-quality aluminum lamp body can effectively prevent deformation. 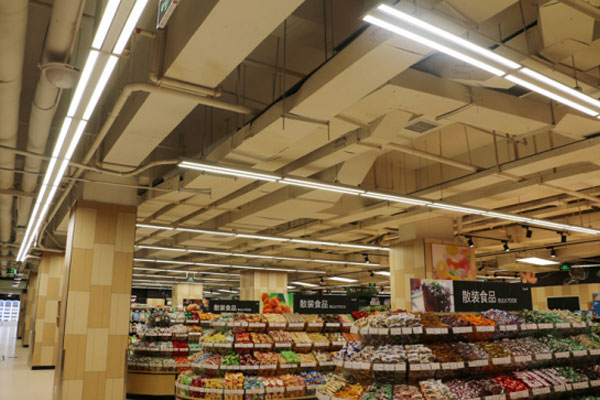 YH Group was founded in 1965. It is a well-known European retailer with more than 1,000 operating retail units and its business scope covers 12 countries and regions around the world. YH Group leads the market with three main business models: hypermarkets, supermarkets and discounters. In addition, YH has also developed convenience stores and membership-based mass stores in some countries. The total number of employees currently exceeds 100,000. In 2014, YH’s supermarket in Dongguan, China upgraded its LED lighting system, and reached a business cooperation with us on dual wing LED linear light.

In March 2014, Mr. Chen, the purchasing manager of YH, contacted us by phone and expressed his desire to purchase a set of high-brightness LED lamps for supermarkets. Taking into account the characteristics of supermarket lighting, our engineers have launched a dual wing LED linear light lighting solution. For a large supermarket like YH, in addition to lighting effects, product price and time cost must be considered. The installation of the dual wing LED linear light is relatively simple, and the splicing processing can be performed between multiple lamp bodies. Because there are no complicated and redundant cables, installation costs such as material costs and wiring are greatly saved. The most important thing is that the light-emitting angle of the double-tube linear lights we developed can be adjusted. Items on supermarket shelves often cannot get uniform and reasonable lighting due to angle problems. The dual wing LED linear light can perfectly solve the problem of light layout. Mr. Chen was satisfied with our plan and placed an order for 200PCS at the end of March. In May 2014, an additional 300pcs were added for the opening of new stores.

The dual wing LED linear light that YH ordered from our company are mainly used for supermarket lighting decoration, of which 60% are used for the opening of new stores, and 40% are used for the upgrading of old stores. After the installation of line lights, the supermarket environment becomes brighter and more beautiful, which plays a great role in increasing product sales in supermarkets and attracting store popularity.

Billionaire Lighting is a comprehensive lighting enterprise integrating R&D, production, sales and service. We have rich ODM and OEM experience. We accept product inquiries and customized services from all over the world. Feel free to contact us anytime: [email protected] .